AirAsia Philippines welcomes the ‘Ber’ months with a bang as it ramps up its international destinations with exciting deals and promos to entice balikbayans, Overseas Filipino Workers and leisure travelers to explore Asean destinations.

Kicking off the ‘Ber’ months is the 20% OFF offering for Manila-Singapore flights for bookings from August 29 to September 4, for travels from September 5, 2022, in time for the Mid-Autumn (Mooncake) Festival, to March 25, 2023. 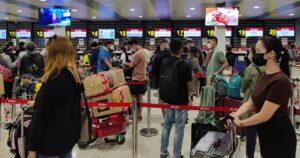 The World’s Best Low-Cost Airline is also offering Php99 one-way base fare to select AirAsia destinations with ‘9.9 Early BER Sale’, available for bookings made from 5 to 11 September for travels beginning 5 September 2022 to 25 March 2023.

Guests who wish to avail the 20% discount for Singapore flights and the 9.9 Early BER Sale may book via the airasia Super App.

AirAsia Spokesperson and Head of Communications and Public Affairs Steve Dailisan said, “AirAsia Philippines is positioning itself to once again dominate the Asian market.  Our additional flight frequencies and promos are strategically put in place to help achieve our pre-pandemic figure of more than 2.6 million international seats sold.  Additional flights and exciting deals are also our way of boosting international tourist arrivals in the Philippines and other Asian countries we fly to, especially now that we have been observing an improved fuel pricing situation.” 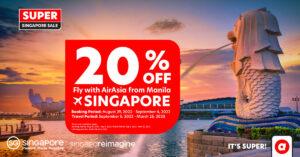 To sustain its momentum towards the ‘Ber’ months, AirAsia Philippines will be increasing its flights to Denpasar, Indonesia; Bangkok, Thailand; and Kota Kinabalu and  Kuala Lumpur, Malaysia from 3x to 7x weekly by 17 September.

Manila-Incheon and Cebu- Incheon flights will still continue to fly 5x and 3x weekly respectively. Manila-Singapore flights will also remain at 4x weekly while flights to Hong-Kong and Canton – China will be serviced every Friday.

“The holidays tied with the ‘Ber’ months are special to Filipinos and other Asian nationalities. AirAsia is about bridging the gap between countries and bringing families closer together,” Dailisan added.

All AirAsia Philippines international flights will continue to depart and arrive at the Ninoy Aquino International Airport (NAIA) Terminal 3.  Guests are advised to be at the airport at least four hours before their scheduled departure to avoid traffic build-up around the airport, and closely monitor the travel requirements and protocols implemented in different destinations by visiting the airasia Fly SAFE page.

The World’s Best Low-Cost Airline which was recently recognized as among 2022’s top 10 safest airlines in the world by Airlineratings.com with 7/7 Safety and COVID-19 star ratings assures its guests of the highest standards in safety compliance in all of its flights.