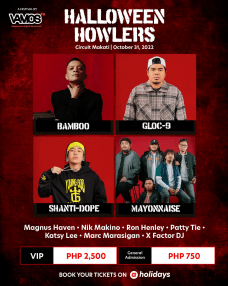 As part of its promise to be the best digital travel and lifestyle platform, airasia Super App is giving its users access to affordable concerts and shows of their favorite bands and artists.

This means, aside from flights, hotels and travel essentials, airasia Super App is now selling tickets to some of the much-awaited concert scenes and gatherings via airasia Holidays at discounted rates.

To celebrate this milestone, airasia Super App is giving away discounted tickets to Halloween Howlers happening on October 31 at Circuit Makati.

This year, Halloween Howlers is reigniting the concert scene with spectacular performances by some of the Philippines’ top local artists such as Bamboo, Gloc-9, Mayonnaise, ShantiDope, and more. The country’s sought after DJs including Marc Marasigan, Patty Tiu, Katsy Lee, and X-Factor will be playing beats for the halloween howlers to party the night away!

Ticket holders will also have access to a huge haunted house and may participate in the following activities:

Ray Berja, Managing Director of airasia Super App Philippines said: “We are happy to introduce this new feature of the airasia Super App. These are truly exciting times. Aside from tour packages and activities, you can now get tickets to some of your favorite concerts and gatherings via airasia holidays. This is part of our commitment to make travel and recreation more affordable and accessible to all. We encourage everyone to try this out as we work towards making the airasia Super App experience better.”

There are up to 90,000 pesos worth of prizes up for grabs to those who will come in their best spooky costumes.

VIP tickets are available at airasia Super App exclusive rate of 2,500 pesos only instead of 5,000 pesos.

Download the airasia Super App via Apple App Store or Google Play Store now. For updates, follow the @airasiasuperapp on Facebook and Instagram. With airasia Super App, Filipinos can now travel and shop more, for less.

About the airasia Super App

The airasia Super App, the ASEAN’s fastest-growing integrated digital travel and lifestyle platform. It is a one-stop shop travel, fintech and e-commerce app that allows users to book flights, hotels and travel packages, activities, car rides, parcel deliveries and even shop for food, clothes, and other products at lower prices.

There are over 700 airlines to choose from in the airasia Super App. Since its global launch, it has also partnered with over 200,000 hotels to secure the best deals for its patrons.